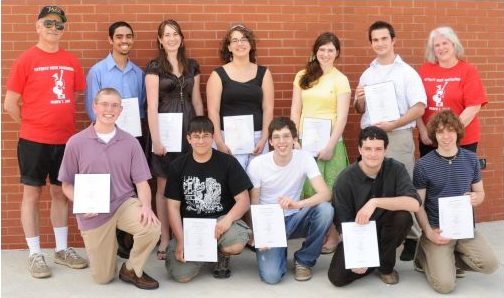 On March 7, 2008, the Metheny Music Foundation of Lee’s Summit (MO) held its first major fundraiser at the Unity Village Activities Center. The concert featured the Pat Metheny Trio, Mike Metheny, and musicians from the Lee’s Summit R-7 school district. Proceeds from the sold out event were set aside for summer music camp scholarships to be awarded to qualifying Lee’s Summit students in the fields of band, jazz, orchestra, vocal, “and any other area of music where the student shows passion and potential,” said Foundation chairperson Kathy Smith.

On May 17, at Lee’s Summit City Hall, Metheny Music Foundation scholarships for 2008 were presented to eleven students. “The March 7th event was so successful that we were able give cash awards to every Lee’s Summit music student who applied,” said Foundation board member Mike Metheny. “We also decided to let the recipients pick which camp they would like to attend.” This year those choices included the University of Missouri/Kansas City (UMKC), the Blue Lake Fine Arts Camp in Michigan, and summer sessions at Boston’s Berklee College of Music.